How IOTA empowers the next automotive industrial revolution

How IOTA empowers the next automotive industrial revolution

The automotive sector has had decades of good years behind them where it seemed that all brands were able to grow their revenue with double digits with every passing year. It didn’t seem to matter if the vehicles were produced in Asia, Europe or the US, there was a customer for every type of car. But in the last couple of years a shift has occurred. Vehicle manufacturers have been busier trying to stay out of the news than concentrating on development, due to most newsworthy items containing information they’d rather not have in the open. Whether it was a decline in profitability, people being laid off, OEM’s moving their factories abroad into other countries providing cheap labor, or the much-dreaded diesel emission scandals in Europe. It hasn’t been easy.

Besides PR difficulties, we see that their, often younger customers don’t see owning a car as a necessity any longer. More and more people are looking into different forms of mobility to move them around their cities, and to commute from their homes to work. Furthermore, The need for other cleaner and electric fuel types, and for new features such as automated driving, is forcing vehicle manufacturers to divert an ever-growing part of their budget into the research and development department.

At the same time new competitors such as Tesla, but also companies like Google and Apple are taking an increasingly bigger part of the market share.

All these challenges are diluting the manufacturers’ profitability and causing them to join forces into shared development, or merge into bigger entities through acquisitions and partnerships. And while it’s impossible for a single solution to tackle all of these issues at once, blockchain technology is convincing visionary people that it can at least solve some of their current and future problems.

One of the most prominent and promising blockchain companies in this regard, spear pointing the automotive and mobility sector with their focused attention is IOTA. And while the IOTA foundation, who has already partnered with multiple automotive companies in the world, including Volkswagen, Audi, Jaguar Land Rover and automotive components supplier Bosch, is not solely focusing on how blockchain technology can advance the mobility sector, it’s main vertical still remains the automotive sector. They have been working on a couple of very interesting developments and we’ll get you up to speed in this article.

Before we delve deeper into IOTA’s current collaborations with the automotive industry, first it’s important to understand what makes IOTA’s distributed ledger technology, called ‘The Tangle’ different from other blockchains. The Tangle has no blocks and no chains.

IOTA aims to solve issues that are linked to Bitcoin’s blockchain structure, primarily the scalability and performance issues. Instead of using a ‘regular’ blockchain architecture, IOTA uses the Tangle.

The Tangle uses DAG (Directed Acyclic Graph ) technology. With DAG technology every transaction has to approve two previous transactions, and without getting into further technical details, it removes the need for miners to validate transactions since a different way of validating is built into this structure. Furthermore, it makes transactions essentially free, removing the high costs that are creating issues with Bitcoins’ blockchain technology.

The transactions are also in real-time. Both these advantages make the IOTA tangle very usable for small, or even nano-transactions. These nano-transactions are an interesting new development and make distributed ledger technology available for a wide set of use cases, especially enabling the machine to machine economy – Machines communicating directly with each other, sending out information, data, and even managing their own bank accounts and transactions – and enabling the Internet of things environment. One of the verticals IOTA is focusing on, and which could benefit tremendously on the advantages of a fast and feeless distributed ledger system is the automotive industry.

We have chosen to not get into the nitty-gritty technical details. If you want to learn more about the technical framework and how the tangle works under the hood we highly recommend taking a look at the  Medium posts written by Alan Gal

IOTA’s projects in the automotive sector

We already see vehicles becoming more and more connected and autonomous, and IOTA sees its own role in this new ecosystem as being in the vanguard of this new technological revolution. Because of the before mentioned advantages of the Tangle, car manufacturers, OEM’s, and other companies that are part of the automotive industry are already testing and piloting projects using the Tangle. We’ll highlight some of the most intriguing ones, with the goal of showing you a bit of the future envisioned by IOTA and their partners.

One of the most interesting use cases so far has to be the ability to earn cryptocurrencies simply by driving and sharing your data. We already mentioned this in our Blockchain & Automotive article, and Jaguar Land Rover has started testing this exciting new way of earning while driving by partnering with the IOTA foundation. By installing smart wallets in the Jaguar F-Pace and the Range Rover Velar models, these test-cars are now able to send and receive data, make microtransactions to pay for services (such as toll booths and parking – read about that later in this article), and earn cryptocurrency by sharing their information. The cars can, for example, transmit information regarding damaged roads and traffic jams. In this process, the driver gets rewarded while creating a safer environment for other people using the road. The system is ingenious and might well become a standard feature of cars produced in the next decade. 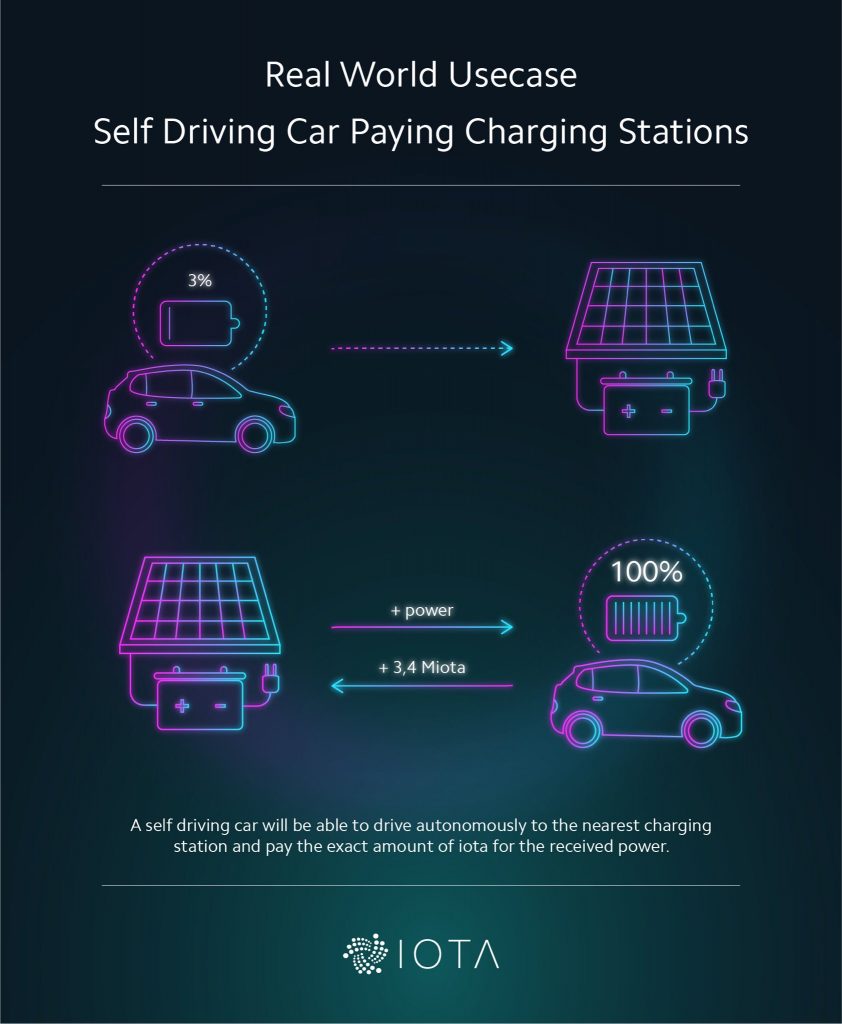 ElaadNL is a Dutch company that focuses on the field of (smart) charging infrastructure. In 2017 they created a working Proof of Concept of an EV charging station working solely on IOTA which saw its official release on April 18th 2019 . The charger makes full use of IOTA for communication with the end-user, for saving meter values, and for the final payment. The IOTA charging station runs completely independently and autonomously, receiving payments and communicating with the end-user.

It supports the exchange of both data and value transactions. ElaadNL chose for IOTA due to the Tangle being ideal for microtransactions, stating they are fast and essentially feeless.

The charging system is enabled by its own machine to machine connection and will be available to the public. People will be able to send their IOTA to their wallets and pay for charging directly through the charger. 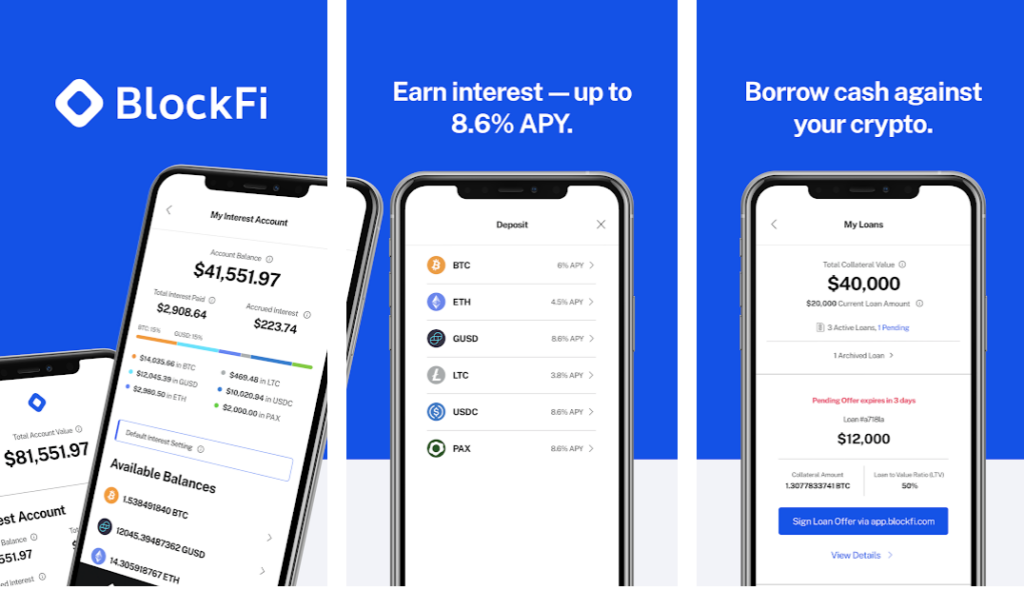 D-fine, a consultancy that provides technology and business analysis services, and Trive.me, a digital brand of EDAG which is a digital accelerator within the mobility industry, have developed a smart parking system together with the IOTA team. The system enables cars to pay automatically for the time and space they need for parking. The system is smart enough to implement dynamic pricing, making sure that ‘hot’ parking spots at certain times will cost more to use than on lower traffic times, influencing when and where people should park their car. IOTA’s tangle has been chosen due to its feeless structure, making it ideal for machine to machine autonomous microtransactions.

“We regard the use of innovative new technologies such as IOTA’s Tangle for applications in the mobility industry as an important step in establishing automated driving and other mobility services. The technology will gradually relieve the driver and infrastructure operators of tedious tasks such as payment, registration and data protection, thus enhancing the driving experience,” explains Alexander Süssemilch, Product Owner at trive.me.

The technology is now fully integrated into the already existing D-fine parking app.

Besides collaborating in the above mentioned smart parking system, EDAG is also utilizing the IOTA tangle in its futuristic autonomous driving Citybot. The Citybot is a 24/7 working, and modular designed vehicle. The vehicle can be used in a wide array of tasks ranging from passenger cell to cargo transporter, city cleaner, and other applications. 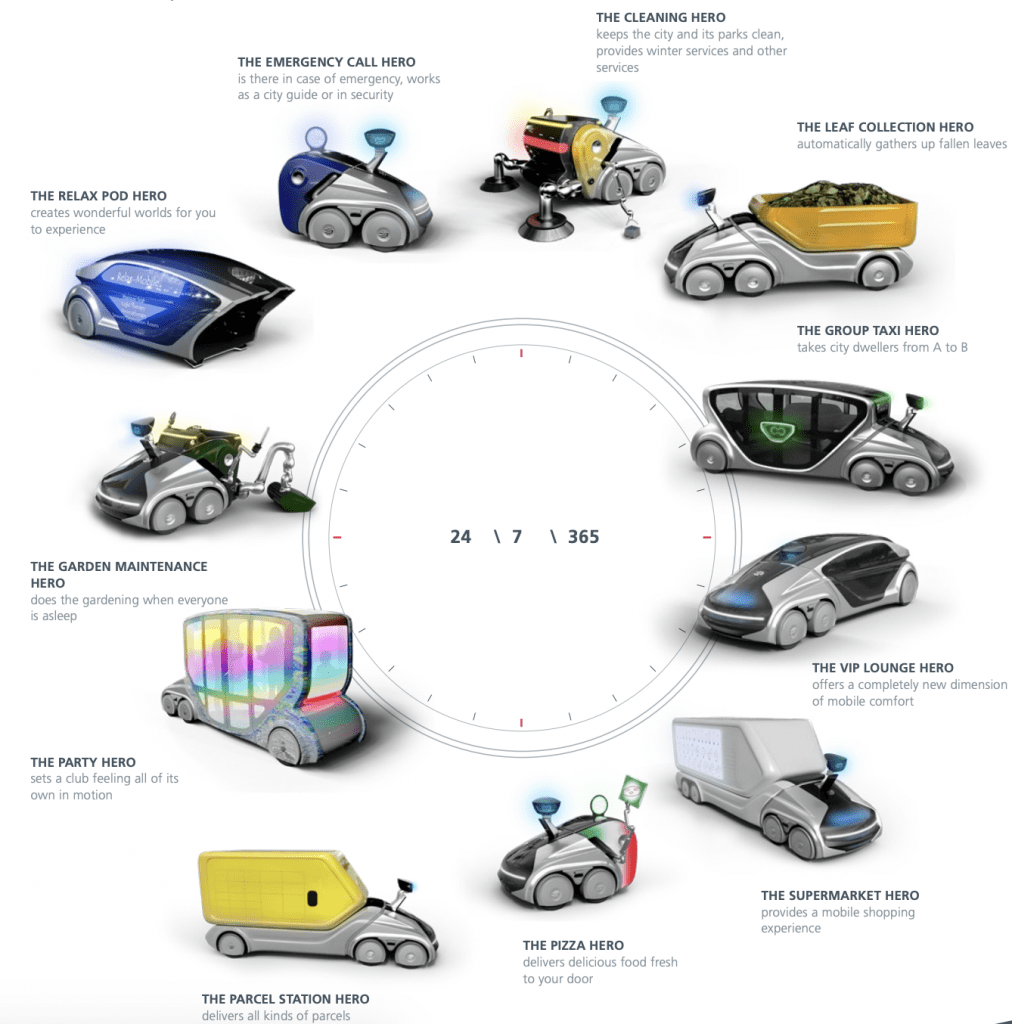 In conjunction with IOTA, who will act as the platform’s technology for the Internet of Things and digital micro-payment solutions partner, CityBot will not only launch new, autonomous transport and work vehicles, but also possible new business models.

IOTA’s fee-less nature allows it to be used for:

While still early in its lifecycle there is a definite chance that CityBot, and future versions will become a familiar face in cities.

When the Tangle just got released and was in its early stages, we were skeptic regarding its functionality, both because there were too many bugs at release, even causing the loss of funds of early investors and because IOTA and the Tangle, in a sense, isn’t really a blockchain. However, when looking at the progress that the (ever-expanding) team has made, both in the partnership area as well as in the development and implementation area, it seems fair to say that the IOTA foundation has been working at a tremendous pace. In only a couple of years, the team has been able to turn a vision into actual working products. Obviously with the help of companies like EDAG, Elaad, and car manufacturers.

It’s getting easier with every passing year to see where the automotive industry and future (urban) mobility is moving towards. Autonomous, smart vehicles, mostly electric, replacing the old combustion and space-consuming modern times workhorse. Vehicles that have an entirely new and own economy where both funds can be earned and spent for exactly when and what is necessary. It only makes sense that cryptocurrency will be part of this new economy, and with IOTA’s tangle making the transactions fast and essentially feeless at least one hurdle has been overcome.

We expect IOTA with its geographic position in Germany to keep taking advantage of its countries heritage in the automotive industry. There are a lot of signs that the industry is spending an increasing amount of their budget in future technologies and when IOTA can stay ahead of the curve, build meaningful relations with their partners and continue their vision, we are confident that IOTA will remain a firm and steady brand in the automotive vertical.

We will continue to digest all new endeavors in this space which include blockchain and cryptocurrencies. We are certain that blockchain technology will add fuel to the already big pile of new and promising technologies that will rocket the automotive industry into a very needed new era. Be sure to follow us too and join our email list to get notified when we finished a new review or write up of one of the projects inside the automotive space! Cryptodeepdives guide to SocialFi – A full exploration of SocialFi

Join me on this socialfi exploration quest and learn something in the process. I’ll research for you and make everything concise and to the point.

What is Defi Kingdoms? Gamified DeFi with upgradeable valuable NFTs

Everything you need to know about DeFi Kingdoms – Revolutionary Play to Earn gaming!

Receive our newest articles in your mailbox!